In the final days of 2010, activists from Sea Shepherd Conservation Society (SSCS) discovered a dolphin clinging to life in a filthy backyard pool at the Dolphin Base Resort in Taiji, Japan. His only comfort was a small yellow buoy.
Video by Andy @ BangBang Concept

We learned that “Misty” was isolated from the other dolphins being held at the facility due to a bacterial lung infection. Sea Shepherd’s Captain Paul Watson offered $5000 of his own personal money for the care and release of Misty, but Dolphin Base would have no part in releasing the sick dolphin. 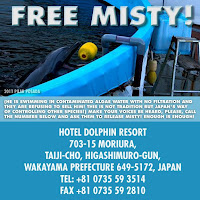 An international campaign, “Save Misty the Dolphin” was launched through facebook. Thousands of people called, faxed and e-mailed Dolphin Base around the clock - and then after five days of intense pressure on the part of activists, Misty was moved to a cleaner pool. To the best of our knowledge, Misty remains in the pool in a highly secured area within Dolphin Base, where he is part of their swim with the dolphins program. Dolphin Base will not respond to our inquiries about Misty nor will they allow access to him by activists.

The last images taken of Misty were just days before the massive earthquake and tsunami struck Japan in March 2011. We would like to take this opportunity to issue an appeal to our entire network for assistance in monitoring these animals. If you are in Japan and/or able to provide an update on the status of Misty and any of the other captive dolphins in Taiji or elsewhere, please contact us. Any and all suggestions are welcomed from this community!
Through this blog and our facebook page, Save Misty the Dolphin, we will continue to work to end the slaughter and captive trade of all marine mammals. Of course, Misty is very special and beloved. We will continue to pray for his health and that one day he will get to swim freely in the open sea, where he belongs.